The son of Sage Rishyasrunga and Shanta Devi named Yada Maharishi, in Thretha yuga performed strict penance for Lord Narsimha in a cave with the blessings of Lord hanuman in between the hills of Bhongir and Raigiri. By his devotion, lord Narimsha compassionated and manifested in five forms as Sri Jwala Narasimha, Sri Yogananda, Sri Gandabherunda, Sri Ugra Narasimha and Sri Lakshmi Narasimha. Yada Maharshi asked the Lord to stay on the hill in all the five forms in the cave.

Another Epical history says that Lord Sriman Narayana compassioned by the penance of Sage Rishyasrunga and sent Lord Hanuman, to direct him in the direction where Sri Lakshminarasimha Swamy stays. That place now called as the foot of Yadagiri hillock.

The novel architectural and glorious thing is the golden Sudarshana Chakra of Lord Vishnu, that embedded with powers and glory as no human hand capable of moving it, that situated at the top of Garbha Gruha in 3 ft*3 ft that visible from 6km. Many people believe that some years ago, Sudarshana Chakra used to guide devotees towards the temple.

Most of the devotees believe that Lord Narasimha incarnated as Vaidya Narasimha to cure most of the chronic diseases and Graha doshas and mental health issues. Some instances say that the Lord appear in the dreams of the devotees and bless them with good mental health. The famous Seva in this temple is mandala parikramas for 40 days that helps in curing multiple diseases and doshas regarding health and doshas. 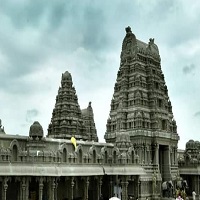 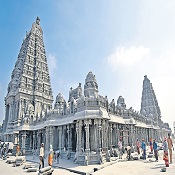 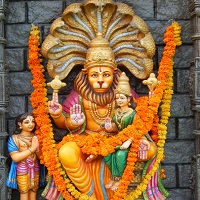