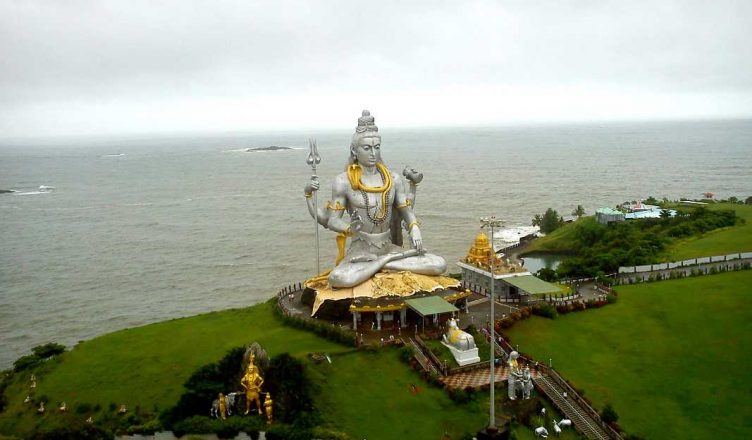 Shri Murudeshwara Temple is India’s second-largest statue of shiva. This temple is dedicated to lord shiva who is in the carnation of murudeshwara. The raja gopuram of this temple is 237.5 feet which are constructed on the hill of kanduka. There is the availability of lift to the top of the gopuram. The temple is covered with the Arabian sea on three sides of the temple. At the lord shiva temple of Shri, Rameshwaram is located and the shaneshwara statue is located next to the lord shiva statue. At the entry of the temple, there are two elephants as the guards to the temple

Its believed that the lord shiva had given asthma linga which is in his heart to Ravana. Murudeshwara is one of the Pancha kshetras of lord shiva in Karnataka. The mammoth statue which is built in a way that the sun rays will fall first on the statue. Its believed by the devotes to get prosperity they have to pour oil in the deep at look their face in the oil. The gopuram is the second-largest gopuram in the world. Where is Murudeshwara Temple Located:

How To Reach Murudeshwara Temple:

There are three ways to reach the temple as

By Air: Mangalore is the nearest airport to reach the temple which is 165 km

By Train: Murudeshwar is the nearest airport to reach the temple

By Road: There are regular buses that are available to Karnataka

Brahmotsavam is not celebrated in this temple

Nearby Places And Visiting Places In Murudeshwara Temple: