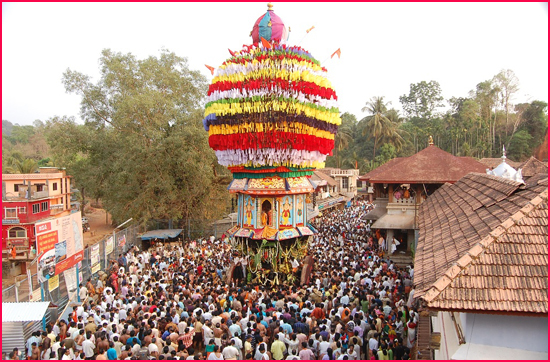 Sri Mookambika Temple Kollur is located in the kodachadri peak. This temple is dedicated to Parvathi Devi. In this temple, the goddess is in the form of Jyothi-linga which means its the combination of both shiva and Shakthi. Its believed that the statue of the goddess is installed by Adi Shankara.

According to Puranas that Adi Shankaracharya is a devote of Saraswathi and he prayed Saraswathi for her existence in Kerala so that she appeared and agreed to fulfil his vow. He asked the goddess to come to Kerala along with him and she agreed for that with a condition that he shouldn’t look back until Kerala reaches. Shankaracharya can’t fell the presence of the goddess and turned back so that she stopped at that place and became a statue. After the continuous pleading, she accepted to move to Kerala and stayed there as mookambika Devi from noons and as Lakshmi Devi in chottanikar temple in the mornings.

What Are The Possible Ways To Reach Sri Mookambika Temple Kollur:

Where Is Kollur Mookambiika Temple Located:

The kollur temple will be opened at 5:00 a.m and closes at 6:00 p.m. A brief explanation about the temple timings is given as below.

The following gives information about the seva details of the temple.

Women should wear sarees or half sarees or kurtas with dupattas. western wear is strictly restricted to the temple.