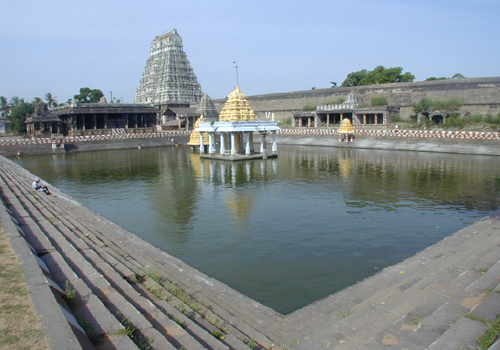 Varadharaja Perumal Temple Kanchipuram – The temple Kanchipuram is dedicated to Lord Shiva which was located in Vishnu Kanchi; this was built in the ancient years in 25 acres of land. Varadaraja is referred to as the king of Devas is the boon giver.

As per the legends, Lord Brahma performed yajna here to purify himself with his Consorts Gayatri and Savitri by ignoring Goddess Saraswati.

The main deity, Lord Varadraja is in standing posture, facing and holding Sanku Chakra Gada Padma with his four hands. It is said that the main deity of Lord Varadaraja was sculptured out of rock here after the original wooden idle of Atthi Varadraja got damaged hundreds of years ago. Once in 40 years, Athi Varadarajan Idol will be taken out in a procession. Two disciples of sage Gautham used to fill the Pooja vessel regularly with water. One day, a lizard fell into a pooja vessel which was filled with water. Unknowingly the disciples placed this vessel in front of the sage. Gautham Rishi noticed the Lizard in the vessel while offering prayers to the lord. Sage angered for their disciple’s ignorance and cursed them to become lizards.

As advised by the sage, two disciples reached Kanchipuram and stayed here as lizards for a long. Disciples got relieved from their curse, when Indra who was cursed by Goddess Saraswati, came here as an elephant and prayed for Lord Varadaraja. Disciples attained salvation but their mortal coil remained here. It is believed that who prays Lord Varadaraja and touches these two lizards on their way out will be relieved from all chronic diseases. This temple was located in the holy city of Kanchipuram, Tamil Nadu, India.

The Varadarajan temple is open to the devotees offering prayers from 6 am to 12 pm and again at noon from 4 pm to 9 pm. Every year the festival called Bhramostavam is celebrated in the month of Sivakasi, while the Adhyayanostavam is celebrated in the month of Margazhi. The Garuda Seva and the chariot festival during the Bhramostavam draw thousands of pilgrims. During Chitra pournami and Pongal, the idol is taken out to neighboring areas.

It is not difficult to find quality accommodation in Kanchipuram. Most of the lodges are suited near the city bus stand. Some guesthouses also provide basic facilities and a peaceful environment for travellers. There are good accommodations available in Kanchipuram from deluxe hotels to budget hotels. Hotels in Kanchipuram are known for their traditional warmth and hospitality.