Lotus Temple is also called Bahai House is located in New Delhi, India. Everyone can worship lotus temple; it has no religious or any other distinctions as highlighted in Bahai Texts. According to the Bahai laws, it instructs that not only the holy scriptures of the Bahai Faith but also we read other religions chanted in the temple to worship irrespective of language. 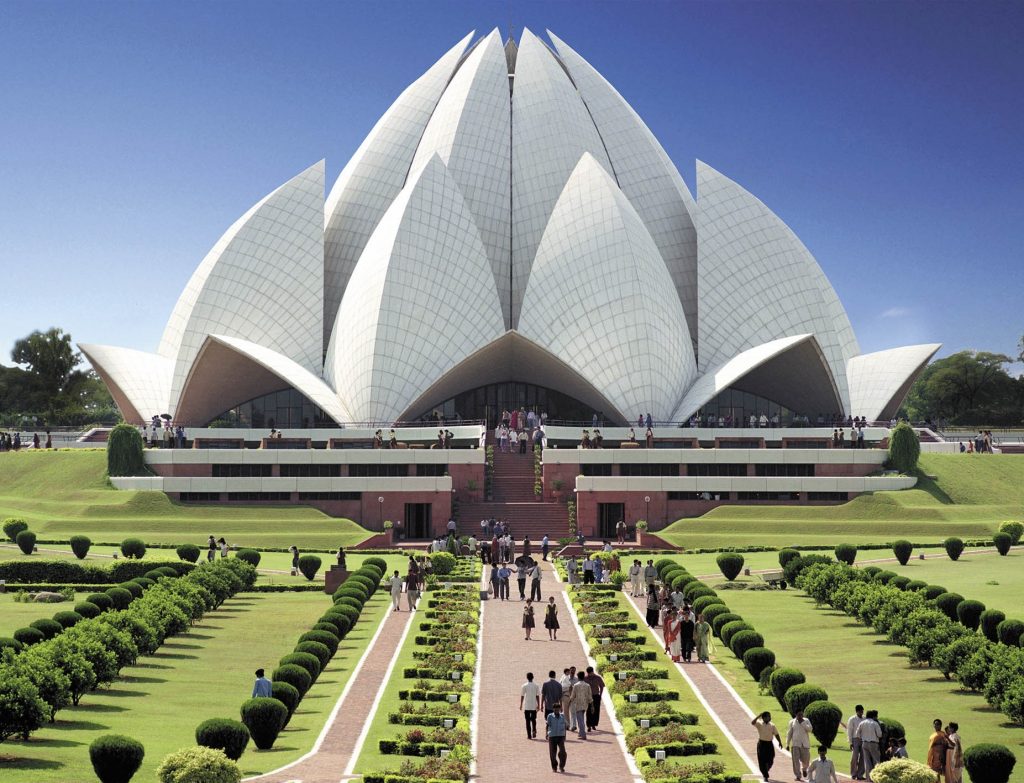 Lotus Temple is built under the supervision of Iranian FariborzSahba, who is presently living in Canada. Banai approached with an architectural plan in 1976, and the construction is traditionally completed by the year 1986. The structural design was guided by UK firm Flint and Neil.  The land offered by Ardeshir Rustampur, who lives in Hyderabad. The material for the construction brought by the ECC Construction Group of Larsen &Toubro Limited.

There are no musical instruments, sermons, or rituals followed inside the temple. This temple built to the east of Nehru place and built in the shape of Lotus that resembles peace,  wealth in the world.

Why Is It Named As Lotus Temple?

The story behind the lotus temple is many people think that because of its shape, it called a lotus temple, but it is far from the truth. Lotus is a symbol of peace, purity, and love. It passes the message of immorality because Bahai designed as a lotus flower and named it as Lotus Temple. 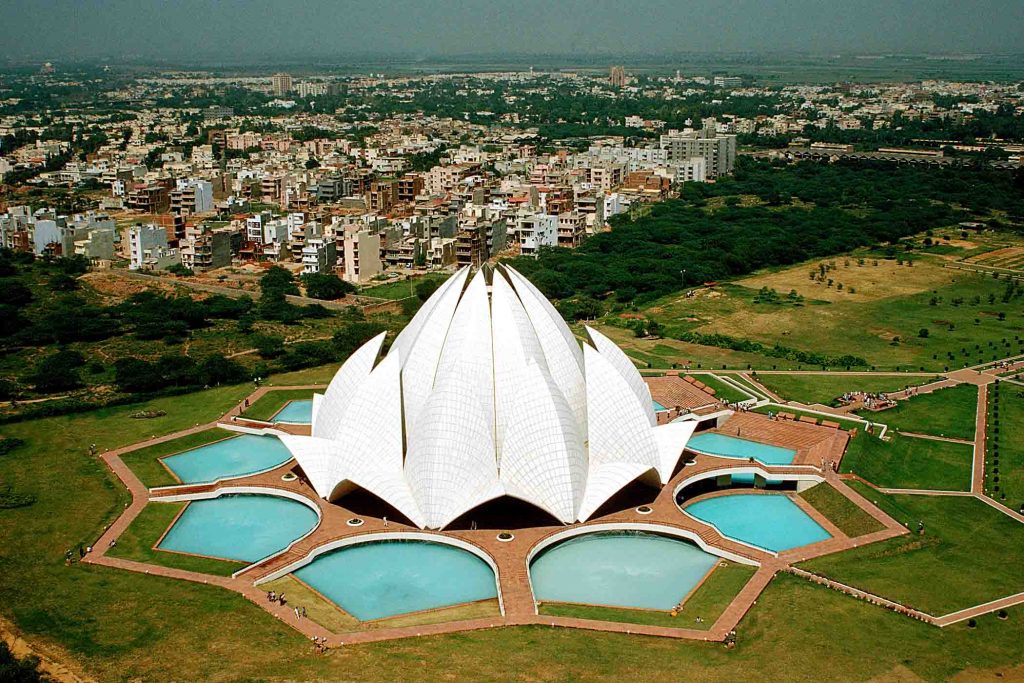 Architecture Of The Lotus Temple:

The lotus temple constructed with original marble stones, cement, dolomite, and sand. The temple consists of 45 lotus petals and nine pools around it. The temple is constructed 34meters from floor to peak and a diameter of 70 meters with a seating capacity of 1300 devotees.

The nine pools on the platforms signify the leaves of the lotus pool, which attracts the devotees to the building and also keeps the building cool.  The lotus structure consists of two layers. One layer contains the nine closed white marbles, which point to heaven, and another layer contains nine petals that cover the portal.

There are no religious icons inside the temple. We can find only copies of Holy Scriptures and wooden seats. The temple is the best place for meditation, to obtain peace and calmness. People will grow their character and sense of discipline through meditation and prayers in the temple 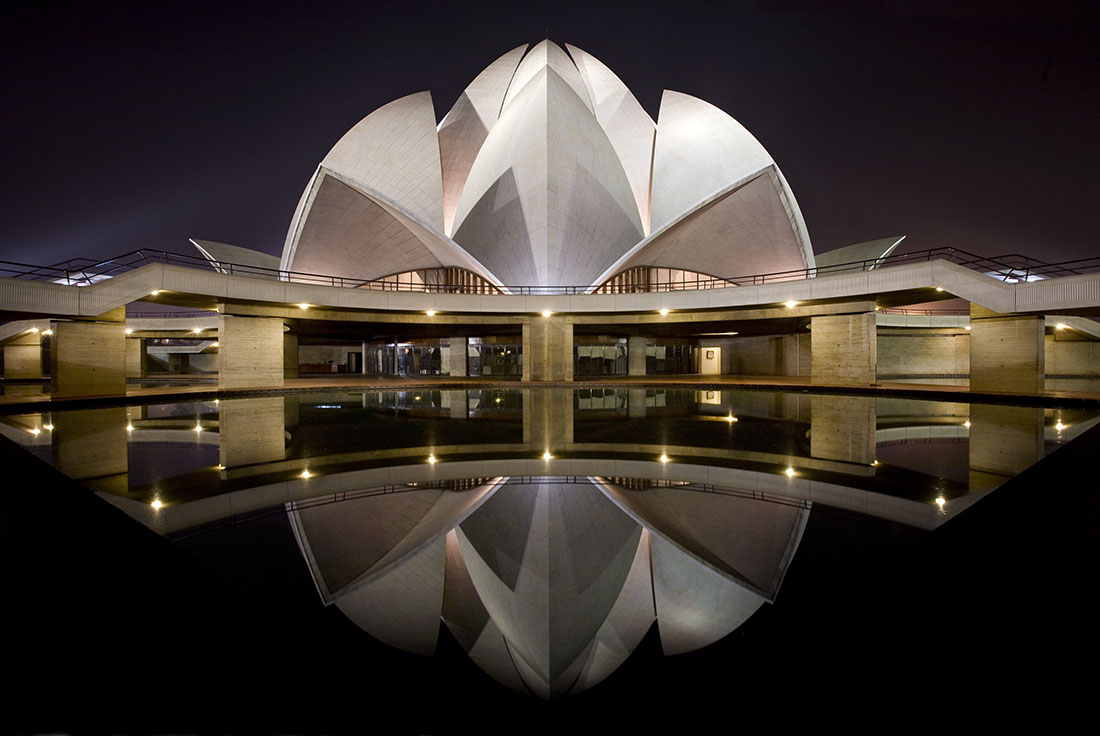 According to the Bahai faith, it’s a belief that meditation and peace are two things for the development of the human soul in this world. Doing the praying define as ‘conversation to god’ and meditation is the ‘Key for opening doors of mysteries.’  Bahai Faith aims to bond the heart of the people and get them closer to their creator. 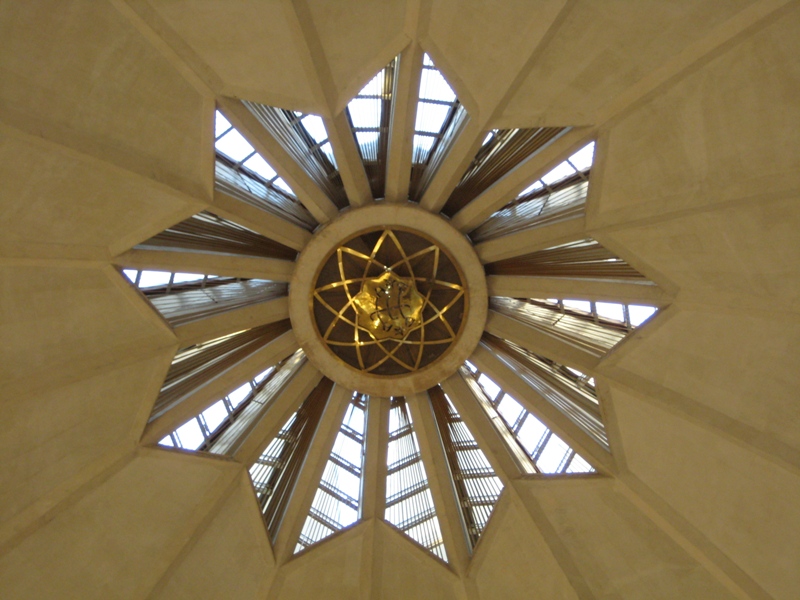 About 800 engineers, artisans, technicians, and workers were trying to understand the most complicated constructions in the world(lotus temple). It wasn’t very easy to line up and to make the exact complex double-curved surface, their interaction, and the closeness of the petals.

It’s not possible to construct entirely by local laborers, each and everyone tried hard to complete the construction. The petals concreted continuously for 48 hours approximately and concrete carried by women on their heads in baskets that weigh up to 50 pounds. 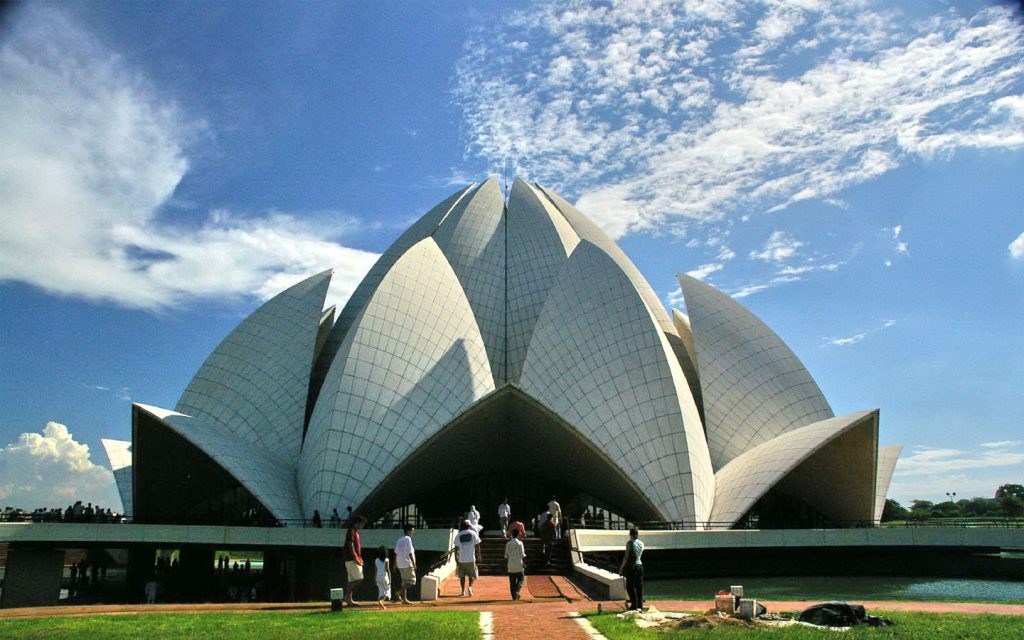 Lotus temple is one of the seven Bahai Houses of worship which stands for its glory all over the world for both structural design and get the rationale behind the construction. It has 9 doors open in a central hall and it is engaged with more than 2500 people. It closed with nine ponds over 40 meters tall. The beauty of the temple lies in the structure of white marble. As we see the temple, it looks like a lotus flower floating on the water.

Temple is open from Tuesday to Sunday; Lotus Temple losed on Mondays

There are many different Prominent Visiting Places Around the Lotus Temple 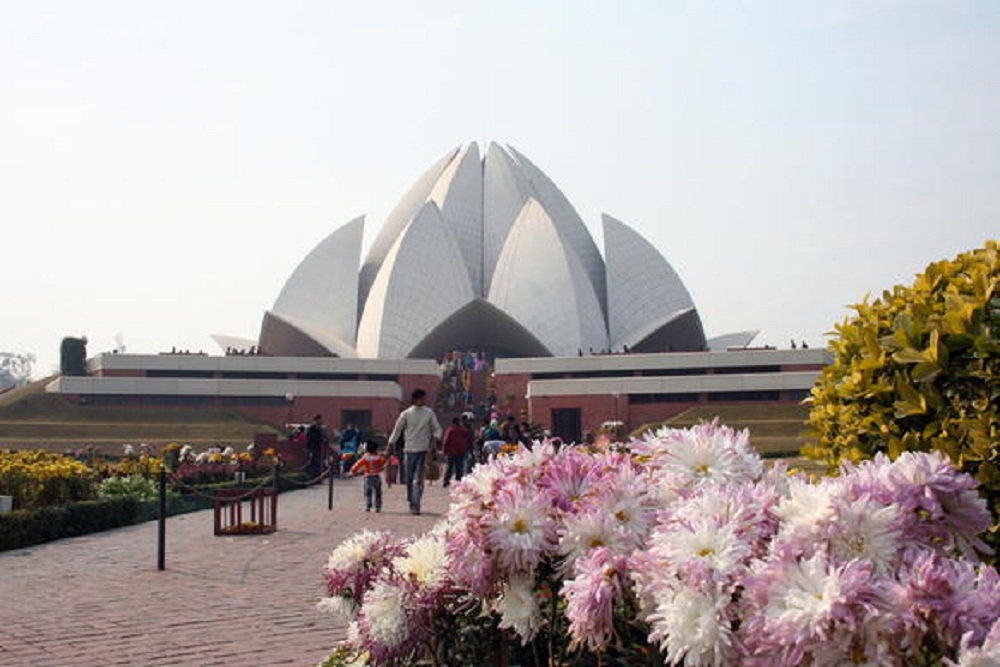 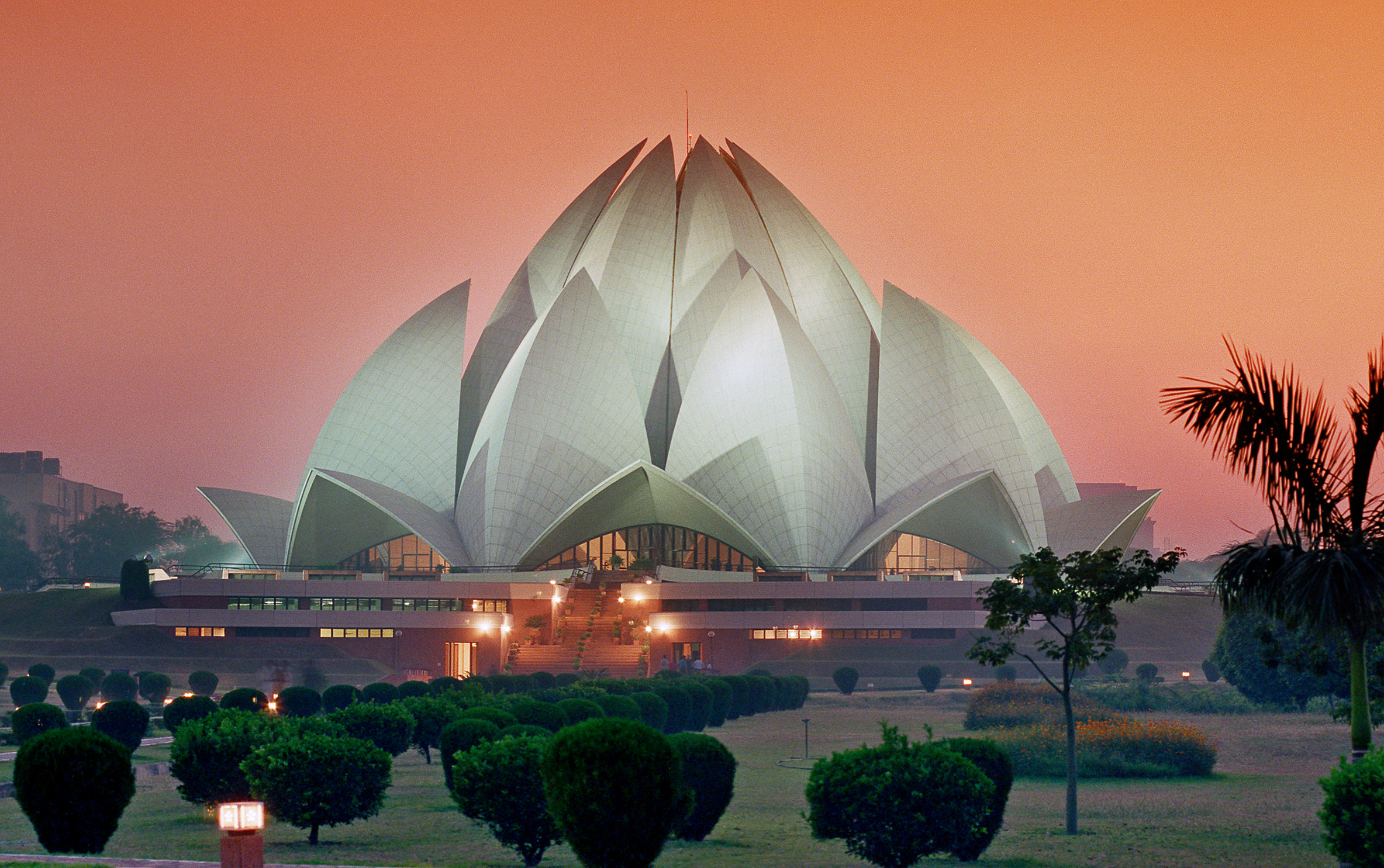 How to Reach Lotus Temple, Delhi 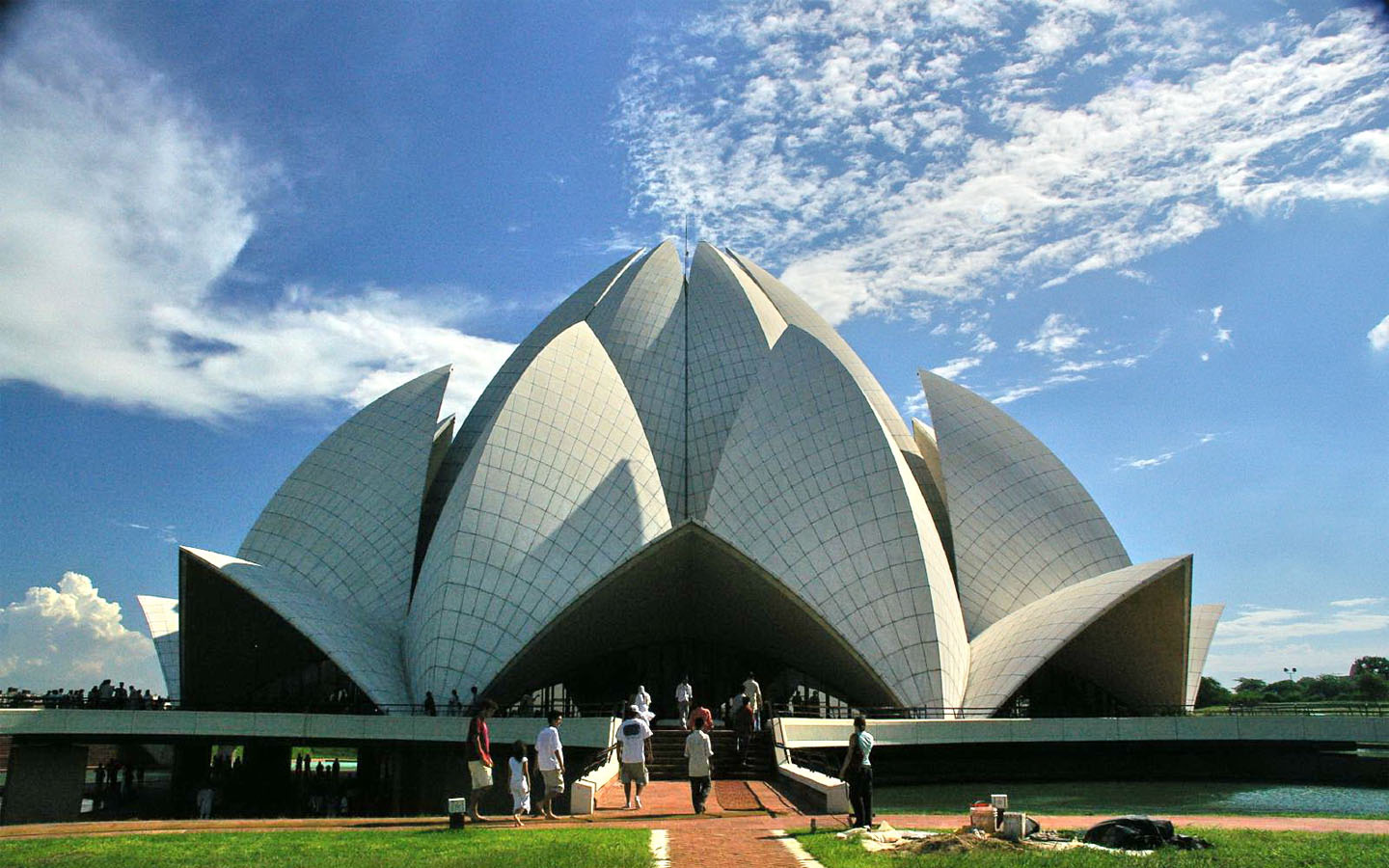