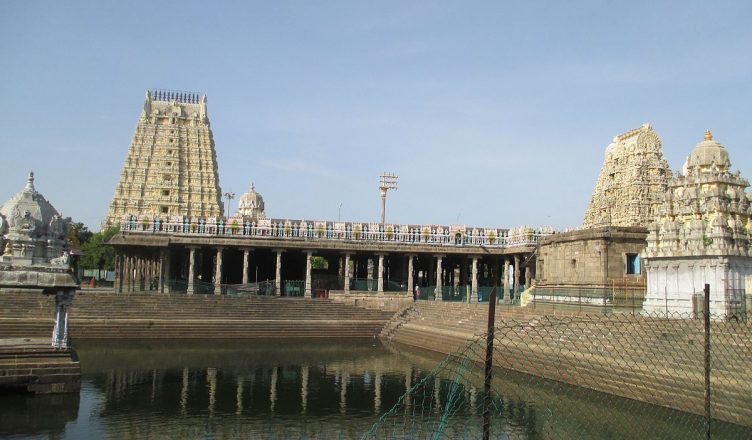 Ekambareswarar Temple Kanchipuram temple is dedicated to lord shiva. This temple is one of the panch boothas stalas and this temple represents Prithvi. This temple is dedicated to lord shiva and the shrine of shiva in the form of shiva lingam which is also called prithvi lingam, goddess gowridevi is place on the side to god shiva. The temple has many houses as nilathingal thundam, perumal temple, divyadesam. The temple is considered as one of the largest temples of india as it is occupied with 25 acres. Totally there are four gopurams in the temples as one of them is considered as the largest gopurams in india, the gopuram at the south side is 58.5216 meters height and the largest one in india. There are many shrines in the temple out of them the famous shrines are ekambareswarar, nilathingal thundam perumal are most prominent. From the time of vijayanagar period there is a thousand pillared hall.

In 1509, Krishna deva Raya of the Vijayanagara kingdom build a 60-meter gopuram which has 540 pillars.

When lord shiva is meditating Parvati closed his eyes mischievously which resulted in complete darkness on earth. so, Parvathi came to earth and created earth linga under a mango tree and worshipped the linga which in result created an earth linga in Kanchipuram. 3500 years old mango tree which is having four branches they represent four Vedas as

The path to the tree is represented with 1008 Siva lingas.

According to another legend, goddess parvathi penance to god shiva under the mango tree which is near to the Vegavathi River. To test the devotion of parvathi devi lord shiva sent fire on to her and to get rid of fire she prayed to lord Vishnu then she used the rays the moon that is in the hair(jatajutam) of lord shiva to cool the fire and in order not to interrupt the penance of parvathi devi. Lord shiva tired to interrupt the penance by sending ganga to the parvathi but parvathi prayed ganga not to hitch her so that she left without causing any damage to her. Finally goddess parvathi build shiva linga with sand so that this place is called ekambareswarar or lord of the mango tree.

According to another legend goddess parvathi used to penance lord shiva in the form of prithvi lingam ubnder a mango tree which is near to the vegavathi river. The vegavathi river threatened parvathi that she will engulf shiva linga so that parvathi protected the lingam which made shiva to be touched and married her.

Where Is Ekambareswarar Temple Located:

The temple covers an area of 23 acres with a gopuram height of 59 m. There are two mandapas as vahana mandapam and sarabesa mandapam. There are thousand pillars in a madapam named as aayiram kaal mandapam. There is a shrine for Vishnu which is hailed by alvar saints who is one of 108 divya desams lord vishu is called nilathingal thundam perumal temple and he is offered rituals in the name of vamana.

Its located in Kanchipuram in the state of Tamil Nadu, India.

How To Reach Ekambareswarar Temple:

AIRWAYS: The nearest airport is Chennai which is 75km away from the temple.

RAILWAYS: Suburban trains are running between Kanchipuram and Chennai

ROADWAYS:  There are adequate bus services from Chennai which nearly takes 2-3 hours to reach.

The following are the festivals that are celebrated at this temple.

The rituals of the lord are offered six times a day. The list is described below

As the shrione is made of sand the ablution is only done to foot. The rituals are performed with nagaswaram and tavil, the Vedas were read by priests. All the pooja has four steps involved in it as

Nearby Temples Of Ekambareswarar Temple: The following are the list of temples that are near to the ekambareswarar temple

Other Temples In The Same Premises Of Ekambareswarar Temple:

Some temples are on the same premises as ekambaram temple.